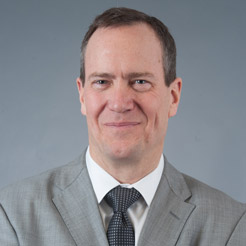 Mark Anderson is the William Osler Professor of Medicine, the director of the Department of Medicine in the Johns Hopkins University School of Medicine and physician-in-chief of The Johns Hopkins Hospital. A 1981 honors graduate in biology from Macalester College in St. Paul, Minnesota, Dr. Anderson received his Ph.D. in physiology and his M.D. from the University of Minnesota. He then completed his internal medicine residency and fellowships in cardiology and clinical cardiac electrophysiology at Stanford before joining the faculty at Vanderbilt in 1996. In October 2005, he moved to the University of Iowa Carver College of Medicine and in 2009 was named chairman and department executive officer of internal medicine. In 2012, he became director of the Cardiovascular Research Center.

An outstanding scientist, teacher and caregiver, Dr. Anderson has focused his research on the role of the protein CaMKII (Ca2+/calmodulin dependent kinase II) in heart failure and cardiac arrhythmias, a cause of sudden cardiac death. He has published more than 160 peer-reviewed journal articles, book chapters and book reviews, and has been an invited speaker throughout the United States and in more than a dozen nations.