Drs. Pankaj Jay Pasricha and Kieren Marr were named the Vice Chair and Associate Vice Chair for Innovation and Commercialization, respectively, beginning June 15, 2015. In these roles, they will work to foster a culture of innovation in the department and help create pathways to turn scholarly activity of our scientists and clinician-scientists into products that touch our patients, through technology licensing and/or entrepreneurial activities. Together they will build and lead a DOM Innovation Council of faculty with interest and expertise in invention and technology transfer and serve as a resource and advocate for faculty and staff who are engaged in commercialization efforts. Both Drs. Pasricha and Marr will have extensive interactions with the Carey Business School and Johns Hopkins Technology Ventures and serve as liaisons between the DOM and these groups. 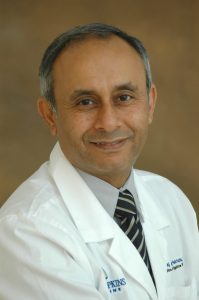 Dr. Pasricha first joined the Division of Gastroenterology as a fellow, then stayed on faculty as director of Therapeutic Endoscopy at Johns Hopkins Hospital and associate director of the Marvin Schuster Center for Gastrointestinal Motility. In 1997, Dr. Pasricha assumed leadership of the GI division at the University of Texas Medical Branch, and in 2007 was appointed as chief of Gastroenterology at Stanford University. In 2012, he came back to Johns Hopkins as the director of the Center for Neurogastroenterology as well as the newly created Food, Body and Mind Center. He holds joint appointments in Neurosciences and in Innovation Management at the Johns Hopkins Carey School of Business.

Dr. Pasricha is currently the chair of the NIH-funded multi-center gastroparesis consortium. In addition, he served on the National Commission on Digestive Diseases, appointed by the Congress to provide a “roadmap” for progress in gastrointestinal disorders. He is the founding chair of the Center for Gastrointestinal Innovation and Technology and served on the FDA GI Drug Advisory Committee for several years. Dr. Pasricha holds more than 45 patents and has co-founded several companies within both the medtech and biotech arenas.

Dr. Marr joined the Division of Infectious Diseases in 2008 where she is a professor and the director of the Transplant and Oncology Infectious Diseases Program. She holds joint appointments in Oncology and the Johns Hopkins Carey School of Business. Prior to Hopkins, Dr. Marr was at the Fred Hutchinson Cancer Research Center and University of Washington where she held appointments in Medicine and Microbiology.

Dr. Marr holds several patents and is co-founder and chief scientific officer of MycoMed Technologies—a JHU start-up company—aiming to develop technologies to prevent infections in the immunosuppressed. Dr. Marr has been the program liaison for the Carey School of Business’ Discovery 2 Market Program since 2008 and teaches at the Bootcamp for Biomedical Entrepreneurs. She has served on the president’s faculty focus group on technology commercialization, the JHU faculty advisory group for technology ventures as well as numerous advisory boards for drug development from stages of VC-backed biotech to large pharma. She has been a long-standing member of NIH review panels for drug development and is core faculty for the JHU Center for Drug Effectiveness and Safety. She currently chairs multiple NIH-funded national cohort and clinical trials focused on rare infections.