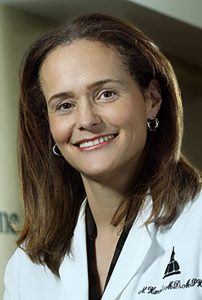 Dr. Hansel directed the Division of Pulmonary and Critical Care Medicine from 2019 until she became interim director in 2022. During that time, she was elected to the American Society for Clinical Investigation (ASCI) and received an Annual Sponsorship Award from the DOM Task Force on Women’s Academic Careers in Medicine. She also leads the Development Core of the Collaborative Centers in Children’s Environmental Health Research and Translation funded by the National Institute of Environmental Health Sciences. Dr. Hansel's areas of clinical expertise include chronic obstructive pulmonary disease and asthma. Her research focuses on understanding environmental determinants and sub-phenotypes of obstructive airway diseases.