The Leaves are Changing and So Are We!

Autumn is here! As temperatures drop and flu season approaches, please remember to get immunized.

Epic Update:  As the organization transitions to a new Electronic Medical Record (EMR), the countdown to the Bayview implementation on December 1, 2015 is fast approaching. Let’s show our support for our colleagues by supporting them during their Go-Live throughout the month of December. You can become a member of the support pool by emailing Erin Chisnell at echisne1@jhmi.edu. Kudos to our multiple super users throughout the department who have stepped up to assist already. Special thanks to Regina Hendrix, Keisha Perrin and Shilta Subhas who are in the process of becoming Epic Credential Trainers who will assist with teaching end-users at both BMC and JHH.

Help support the #NursesUnite media campaign by snapping a photo of you and some of your colleagues proudly wearing your stethoscopes. Email photos to Kelly Reif at kreif@jhmi.edu to be posted on the Hopkins Nursing Facebook page: https://www.facebook.com/TheInstituteForJohnsHopkinsNursingThe campaign began to raise awareness about the nursing profession following recent comments made on The View about a Miss America contestant who performed a monologue about her job while dressed in scrubs and wearing a stethoscope around her neck.

Congratulations to Kisten Nolan, nurse manager in the Moore Clinic who received the Ambulatory Excellence in Leadership Award. Nominated by Dr. Moore due to her outstanding leadership, she has leveraged the nurse role to the highest scope of practice as a case manager, care team member and professional provider and promotes a positive environment that embraces all. 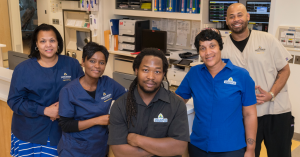 A huge thank you to the following staff who were named Service Stars and will be featured in posters and rotating on the plasma screens outside the cafeteria on the East Baltimore campus.

Grace Nayden, RN, in the CCU won the Peter and Cynthia Rosenwald Star Nurse of the Year Award. Congratulations Grace, and thank you for your 22 years of outstanding service and your determination to always go above and beyond.

Congrats to Terry Washington of Nelson 8 NCIII who was nominated for The Johns Hopkins University School of Nursing Shining Star Award.

Nursing Matters is a regular blog feature that will occur on the 4th Thursday of every month. Please look for the next installment on October 22.