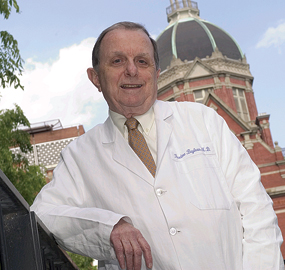 The gala will honor Dr. Theodore Bayless, for his work in the field of inflammatory bowel disease (IBD) with the Honored Hero of Distinction & Lifetime Achievement Award in Medicine (Dr. Bayless retired this year). Dr. Bayless, is a professor in the Division of Gastroenterology and director emeritus of the Meyerhoff Digestive Disease-Inflammatory Bowel Disease Center at Johns Hopkins Medicine. He has served as the director of the American Gastroenterological Association (AGA) section on Immunology, Microbiology and Inflammatory Disorders as well as the national chairman for the CCFA. Dr. Bayless has co-authored 145 peer-reviewed research papers and edited 13 books for practicing physicians and patients. He has received countless awards including a scientific national achievement award; known as the Henry D. Janowitz Lifetime Achievement Award from the CCFA for his extraordinary work in the medical community. In addition, he has centered his over 50-year medical career at Johns Hopkins, providing personal care for more than 5,000 patients with IBD. Dr. Bayless participated in research in celiac disease, lactose intolerance, Whipple’s disease, cholera and caffeine to name a few and even discovered well known digestive medications. Dr. Bayless has been a pioneer in Crohn’s and colitis care and a beacon of hope for the millions who suffer from these diseases.

The event will also include local patients speaking about their experiences, Baltimore chefs with their culinary creations and an auction led by the Sorelle Sisters from Auctions for a Cause.

To donate to the cause or buy tickets for the event, visit: http://online.ccfa.org/site/Calendar?id=139361&view=Detail

About the Crohn’s & Colitis Foundation of America

The Crohn's & Colitis Foundation's mission is to cure Crohn's disease and ulcerative colitis, and to improve the quality of life of children and adults affected by these diseases. The Foundation ranks third among leading health non-profits in the percentage of expense devoted to research toward a cure, and 82 cents of every dollar the Foundation spends goes to mission-critical programs. CCFA has raised over $220 million since its inception. The Foundation consistently meets the standards of organizations that monitor charities, including the Better Business Bureau's Wise Giving Alliance (give.org), the American Institute of Philanthropy (charitywatch.org) and a 4-star rating from Charity Navigator. For more information, contact the Foundation at 800-932-2423 or visit www.ccfa.org.