The Heart Failure Clinical Community is a self-governing network with broad entity representation that comes together to identify and achieve goals related to quality in healthcare. Our patient-centered strategic objectives are to eliminate preventable harms, continuously improve patient outcomes and experience and reduce waste in healthcare delivery.

What? – Entresto (valsartan/sacubitril) is a combination drug of the angiotensin receptor blocker valsartan and the neprilysin inhibitor sacubitril. Neprilysin inhibitors block the breakdown of natriuretic peptides among other heart failure favorable hormones (bradykinin, adrenomedullin) resulting in vasodilation, a reduction in sympathetic tone, reduced aldosterone levels and diuresis.

Why? – Valsartan/sacubitril was randomized against enalapril in 8442 patients with NYHA class II-IV heart failure symptoms, an EF < 40%, and a pro BNP > 600. The trial was discontinued early because the primary endpoint of cardiovascular death and heart failure hospitalization was reduced by 20% and mortality was reduced by 16%. Entresto is now a Class 1 recommendation in the 2016 updated Heart Failure Guidelines. 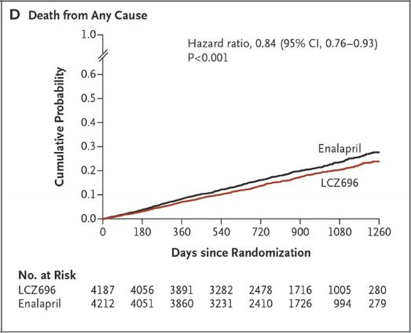 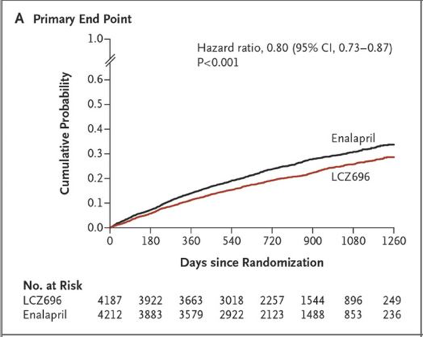 Who? – The study included patients with symptomatic heart failure, EF < 40%, and a proBNP > 600. The vast majority of the patients were NYHA class II/III. All patients needed to tolerate enalapril at 10 mg bid and then valsartan/sacubitril prior to randomization. Approximately 20% of the patients who signed consent for the study were not randomized because they couldn’t tolerate the agents at these doses primarily because of hypotension. Other exclusion criteria included SBP < 100 or symptomatic hypotension, est. GFR < 30, K > 5.2 or a history of ACE/ARB intolerance.

When/where? – This drug was studied in a stable outpatient population on maximal heart failure medical therapy including ACE inhibitor/ARB, beta blockers and aldosterone antagonists. That is the group of patients who should be considered for transition from either an ACE inhibitor or an ARB.

How? – For patients on an ACE inhibitor, need a 48 hour wash out period prior to starting valsartan/sacubitril (due to increased risk of angioedema with ACE and neprilysin inhibitor). Can directly transition over from an ARB. Be careful because the incidence of hypotension is high (14% with symptoms, 2.7% with SBP < 90) and would strongly advise starting at the lowest dose and uptitrating every two to four weeks if tolerated. The incidence of renal impairment and hyperkalemia was not different between the two groups.