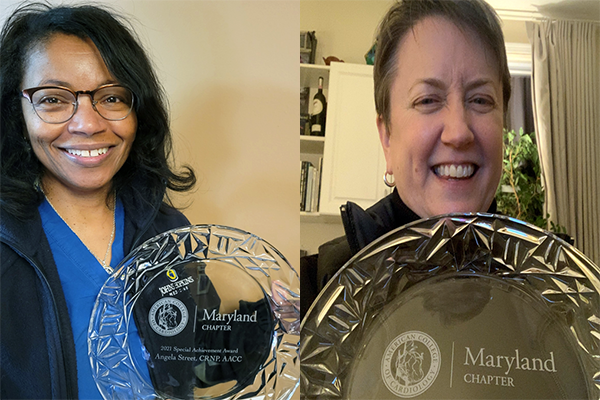 In November 2021, Angela Street, CRNP, AACC, in the Division of Cardiology and Jill “Jae” Patton, MSN, CRNP, AACC in Palliative Medicine were given the Special Achievement Award for 2021 by the American College of Cardiology, Maryland Chapter. Angela and Jae, along with colleague Matt Goldstein, PA-C, received this award for a video they helped produce to educate Baltimore youth about hands-only CPR.

In 2019, an American Heart Association study revealed that black children who have a cardiac arrest in the community are 41 percent less likely to receive bystander CPR than white children. Angela, Jae and other ACC Cardiovascular team leaders submitted a proposal to the College’s Chapter-Section grant competition, and were awarded a grant to lead educational programs in the city of Baltimore. They partnered with REACH Academy in east Baltimore, and the Food Project in west Baltimore to produce a short video teaching basic, hands-only CPR.